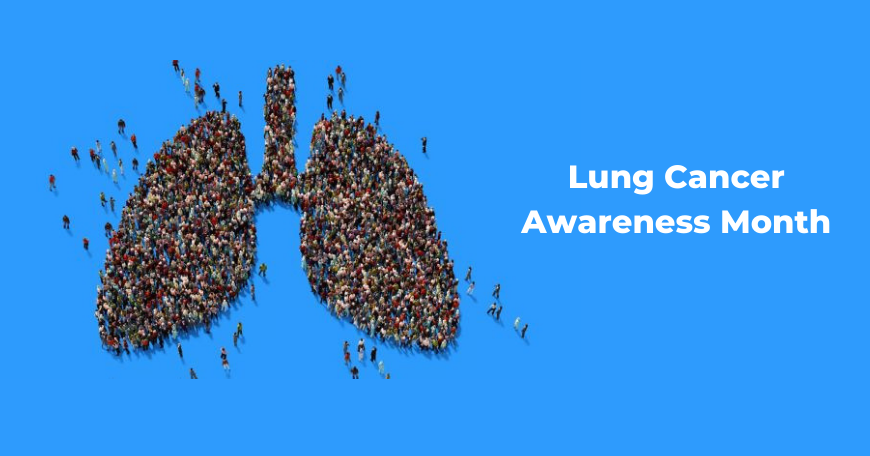 The World Health Organization states that cancer is a leading cause of death worldwide accounting for an estimated 9.6 million deaths in 2018. There were 2.09 million cases of lung cancer. In 2018, lung cancer alone was responsible for 1.76 million deaths.

Lung Cancer is a leading cause of cancer death in men and women the world over. Therefore it is only fitting to dedicate an entire month to spread its awareness. According to the Lung Cancer Awareness Month Coalition, Lung Cancer Awareness Month is a month-long activity wherein organizations all over the world conduct advocacy and outreach activities in various ways to spread awareness about the dangers of lung cancer, its causes, prevention etc. among people and medical professionals.

Cancer is a disease characterized by uncontrolled growth of cells in the body affecting body parts and organs such as our lungs, prostate etc. Our body’s cells are the basic units of life[1] and when the body’s ability to produce the optimal number of cells fails, the excess cell growth accumulates into tumours. These tumours are benign or harmless but, those that are harmful are known as malignant tumours. Malignant tumours can also spread to other parts of the body. This condition is known as metastasis and malignant tumours can become cancerous.

Our lungs are critical organs that support life. Lungs perform the function of filtering air and supplying oxygen to the rest of the body and keep it healthy and functioning

Lung cancer has a higher tendency for metastasis. Lung cancer begins to metastasize very early after its formation and tend to spread to the bones, brain, adrenal glands and liver. This is why it is imperative to prevent lung cancer owing to its properties of spreading quickly to other vital organs of the body and making it all the more difficult to treat. This is why it is extremely important to prevent lung cancer.

The following is  a list of causes of Lung Cancer:[2]

The American Cancer Society outlines the following most common symptoms of lung cancer[3]:

If lung cancer spreads to other parts of the body, it may cause: