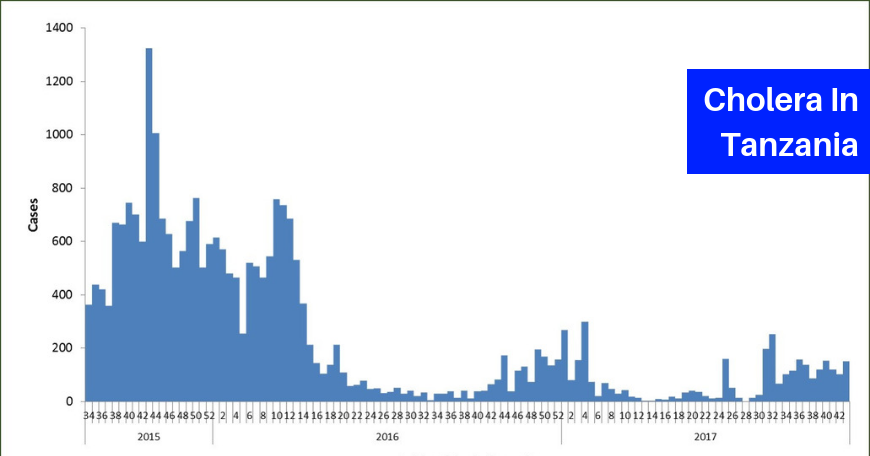 One of the biggest pandemics plaguing the country of Tanzania has been Cholera. This preventable and treatable disease has been a huge issue for the nation and its healthcare system.

Just from August 2015 to January 2018, there have been 33,421 cases of cholera with 542 deaths. At a 1.62% fatality rate, this eminently preventable disease can be a serious ailment. 86% of the cases of cholera arise from the mainland of Tanzania. Regency Medical Centre itself sees many cholera patients between these years.

The largest percentage of victims are children who account for 11.4% of the cases.

This disease an acute gastrointestinal infection caused by Vibrio cholera bacteria. Usually transferred because of contaminated water and food, it has found fertile breeding grounds in Tanzania.

Cholera prevention is all about understanding the causes of the disease. Considering the utterly preventable nature of this disease it is important to know the causes and thus be able to stave off contracting this potentially dangerous disease.

Cholera bacteria occur naturally in coastal waters. It is here that they attach themselves to crustaceans. These crustaceans are natural nomads and travel to areas with high food density, areas which have a high concentration of plankton and algae, usually in areas of greater warmth.

Areas that have a high percentage of humans living there usually have an increased amount of algae near natural water sources. This is because of sewage and agricultural runoff. This is how the crustaceans and their cholera-bearing hitchhikers find a home near human habitation.

The bacteria are ingested into the human body through contaminated water or food. The serious effects of the disease are all because of the potent toxin called CTX produced by the bacterium in the small intestine.

This toxin binds with the intestinal walls and deters the flow of sodium and chloride. Because of this, the body releases a high amount of water leading to diarrhea. This causes a drastic drop in the fluids and salt levels of the body.

Cholera transmission happens through contaminated water used to wash fruits or vegetables, or when contaminated fish or crustaceans are consumed can cause cholera. Well, water or surface water also can be sources of this disease as the bacteria can lie dormant for a very long time.

The people at the most amount risk are those that live in crowded areas with common sources of water. Undercooked seafood, especially shellfish can also constitute a grave risk for the disease. In regions where the disease is widespread, grains too can become a medium for the growth of the bacteria. If you have come in touch with someone who has the disease make sure that you thoroughly sanitize yourself.

One of the best preventative methods to avoid the disease is to practice high standards of hygiene for yourself and your surroundings.

Some of these symptoms are:

Diarrhea: diarrhea caused by cholera has a very sudden onset and results in a serious, often dangerous fluid loss. An individual suffering from the disease may even lose about a liter of fluids in an hour. Diarrhea caused by the disease often has a pale, milky appearance.

Nausea and Vomiting: This is something that usually happens in the early stages of the disease. The vomiting may even persist for hours at a time.

Dehydration: One of the most common symptoms of the disease is the serious lack of fluids in the body. It can cause anything from mild to serious dehydration. If you lose about 10 percent or more of your bodyweight it is considered to be serious.

Shock: A very serious complication resulting from dehydration. The low blood volume caused because of dehydration can drop your blood pressure suddenly. Which in turn drastically reduces the oxygen level in the body. If not treated at the right point of time, this can cause death within minutes.

There are also other factors that indicate cholera. These include lethargy, irritability, sunken eyes, dry mouth, dry and shriveled skin that doesn’t bounce back, muscle cramps because of lack of electrolytes, and extreme thirst. The disease can also cause little to no urine output, low blood pressure as well as arrhythmia.

Complications of cholera can further exacerbate the symptoms. Low blood sugar, low potassium levels, or even renal failure can be caused when the disease gets more complicated.

While the signs and symptoms of cholera can be unmistakable in areas with a high proportion of cases, the only sure way to identify the disease is a stool sample. Today, there are rapid dipstick tests available for cholera that can help healthcare providers rapidly provide treatment to patients. The treatment for the disease consists of the following:

The most important thing to do when someone is identified with cholera is to replace their lost fluids and electrolytes as rapidly as possible. The simple rehydration solution, oral rehydration salts, or ORS, is available commonly around the world for this simple purpose. Dissolve the powder in boiled water and make sure the patient drinks it regularly. Most deaths due to cholera occur because of a lack of rehydration. With treatment, the number of fatalities dropped to less than 1 percent.

While oral fluids are good, there will be severe cases that can require individuals to administered IV fluids.

While these are not strictly necessary in treating cholera, they can definitely reduce the duration and quantity of diarrhea caused by the disease.

Studies have pointed out that zinc may help reduce the duration of cholera among children.

Adults traveling in cholera-affected areas are often prescribed cholera vaccines. The vaccine is a liquid course conducted over a period of 10 days. Cholera treatment is a crucial part of the battle against this disease and at Regency Medical Centre we try our level best to impart knowledge for preventing the disease.